Adam graduated from high school last night at the same location where Parker graduated on Tuesday.  This grad, however, was much longer. Adam received an award during the ceremony and his name indicated that he was an Ontario Scholar (better than 80% in their 6 best grade 12 courses).

One of the really nice parts of the ceremony was that each graduand was named as they came on stage, accompanied by some details about their life in the high school and/or their plans for the future. This certainly made it a much more personal event. It was also the very last graduation ceremony ever for Highland Secondary School, since it is now going to be called Dundas Valley Secondary School as it combines with the closed Parkside High School.

Here are a few photos of Adam from last night: 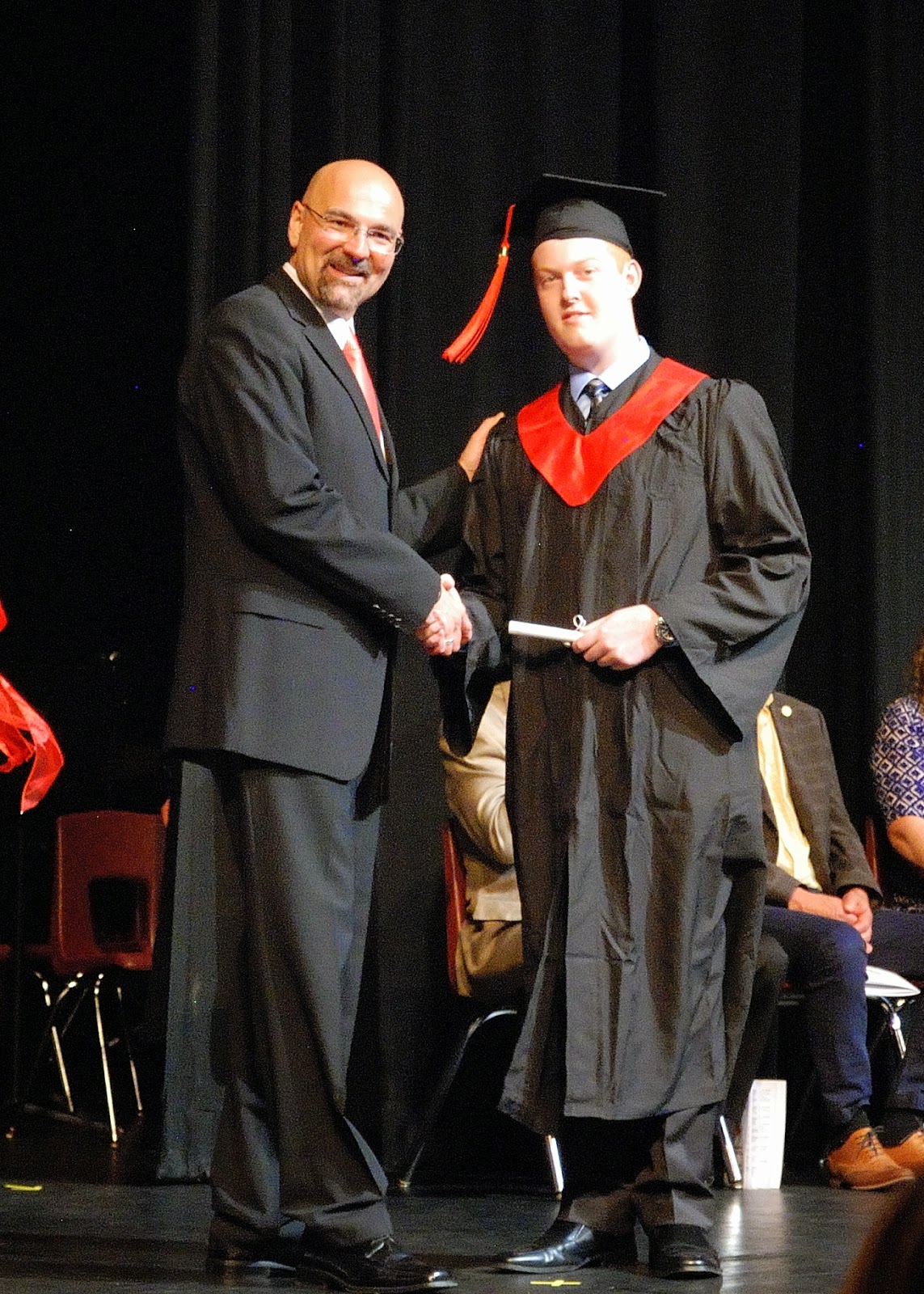 One down, one to go!

Parker graduated from grade 8 today, got his report card, and is now officially finished school for the year. Although a bit grainy (ISO 1600, handheld, ~30 ft away), below is the moment we were waiting for.

Just prior to the ceremony the skies let loose and soaked everything. The reception had to be indoors instead of the tents that you see out the windows.  No worries, we'll try again on Thursday for Adam's grad.

Check back for round two in a couple of days.

After doing one shift as an umpire in the field, Parker graduated to being the home plate umpire at a T-ball game on his second shift. Even better, he did it solo!

Although a bad photo, this was as good as I could get in the sharply setting sun. Parker was supposed to be an assistant for a game on Tuesday this week, but the game was cancelled due to bad weather. The teams rescheduled to Thursday at a different field, and Parker was the only one available. He did very well on his own!

On Sunday we had a drop-in party for the three boys - Adam, Stanley, and Parker - to celebrate the end of the school year.  Parker graduates from grade 8 on Tuesday this coming week (going to high school in the fall), Stanley heads back to China for the summer on Wednesday (going into grade 12 in the fall), and Adam graduates from high school on Thursday (going to Mohawk College in the fall). Such a busy week, it was best to get the real party out of the way early.

After Adam had constantly bugged us about getting him a good camera (he got the taste for quality cameras from borrowing Eric's), he was comforted by opening up a box with a Canon Rebel T3i (18 megapixel) SLR kit with a good zoom lens. His parents know him well.
He was holding back on giving a kiss to mom, but eventually relented! I think I missed catching the kiss by about 0.3 seconds (it probably lasted only 0.2 seconds...). Maybe I'll borrow his camera to get better pictures next time.

Stanley also got into the festivities and was presented with a few things that he can take home to share with his parents.

Parker got a watch from us as well (so he could wear it umpiring) and his aunt and uncle got his a game controller. One of our guests (a pretty young lady also graduating from grade 12 this year) asked Parker if he coloured his hair - she hadn't seen him for a while. I had to break it to her that, actually, he just washed it.
There were a number of other fantastic gifts that the kids received for their special graduations, but they can let you know after they send out their thank you's.

This last bit is mostly for my mom - I have had trouble explaining what kinds of plants are growing in our garden, so I thought I would just take a quick visual tour so she could see it. Beware - boring 6 minutes of video if you are not into gardening...

Wendy and Parker performed a duet at the Dundas Conservatory of Music recital yesterday.

I did video record their performance on the big grand piano, but Wendy and Parker didn't want me to post that version (they had a small glitch near the end of the song). Instead, I am posting a practice session from a day or so before they did their real performance.

We had our first chance to swim in our friend's new pool last night and it was fantastic! They had the pool filled recently and it got warm enough to get in for the first time.


It was a little chilly in the wind, but the hot tub (behind the camera) fixed that very quickly. We practically had to drag the kids out the pool they were having so much fun.

Maddy had quite the exciting weekend. After going on our usual weekend hike and seeing a myriad of dogs, squirrels, birds, and horses, she got home to discover that there was a lot to see in her very own yard.

Not a fan of intruders on her domain, she went berserk when she noticed that there were two very large and very real horses just out her front window. Kind of neat for her humans as well. They were apparently visiting the neighbours across the street.
The very next day she came upon a somewhat ruffled and obviously disoriented Robin - that small speck at the top of the photo below. Wendy went out to fan it away (it was able to fly) and Maddy promptly ran after to make sure it left her property!
Tonight, Maddy was standing at the top of the stairs showing us her new (dry) piece of rawhide (actually, the knot off the end of a rawhide). She got so excited when she heard Adam come home that she dropped it. That little piece of rawhide did a very slow-motion Plinko-esque dance downs the stairs and landed perfectly in the middle of her water bowl! Sadly, Maddy was never a fan of that bobbing for apples thing, so she sat there unable to solve the problem. After I took this picture, I retrieved the now very soggy little treat. She happily took it and toddled off to the living room to play with it, none the worse for wear.

The weekend for the rest of us can be summed up in three words:

Yup, three of them! Yes, we bought three ceiling fans for each of the boys' rooms and put them up (mostly Adam) over the weekend. 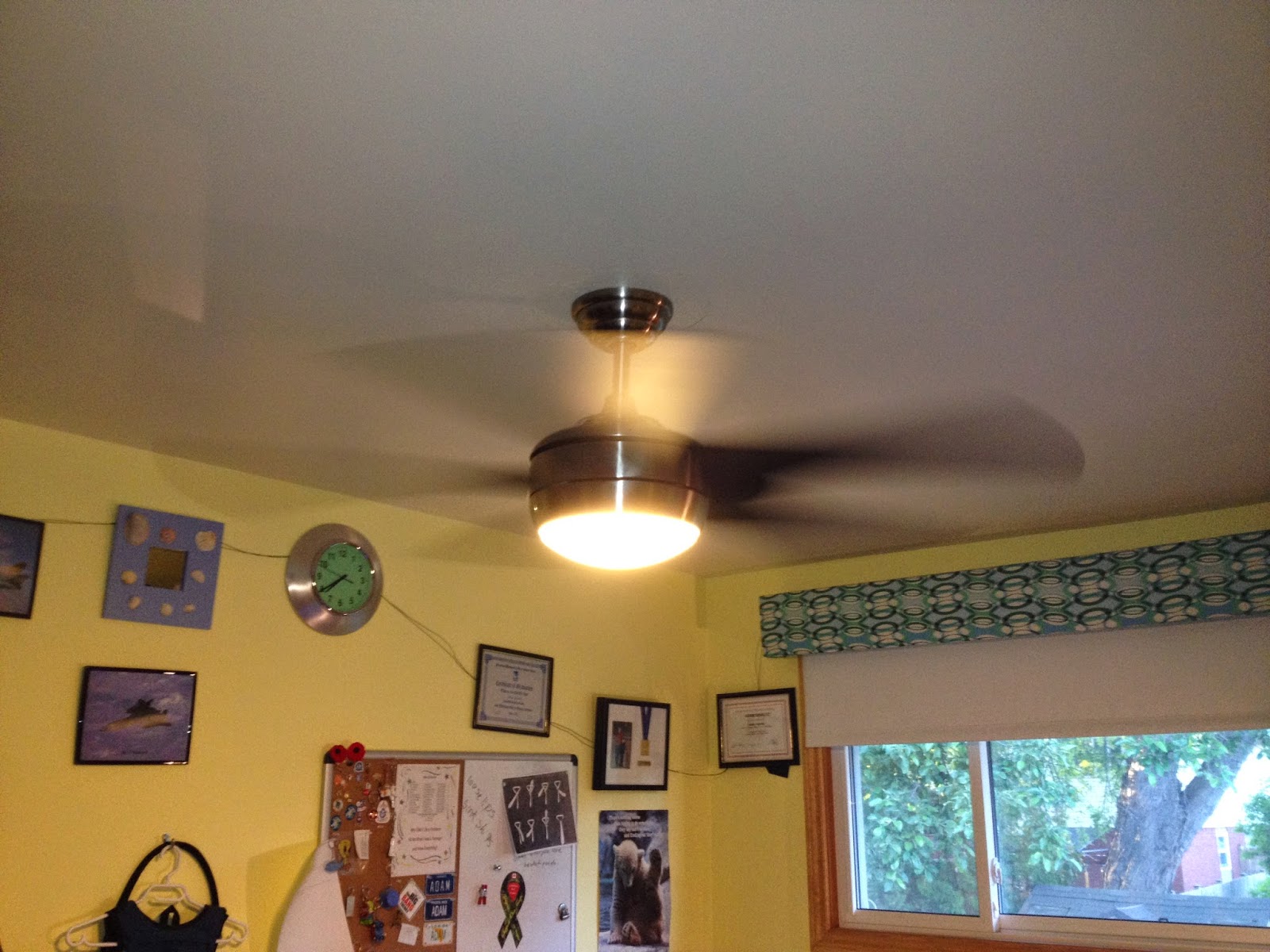 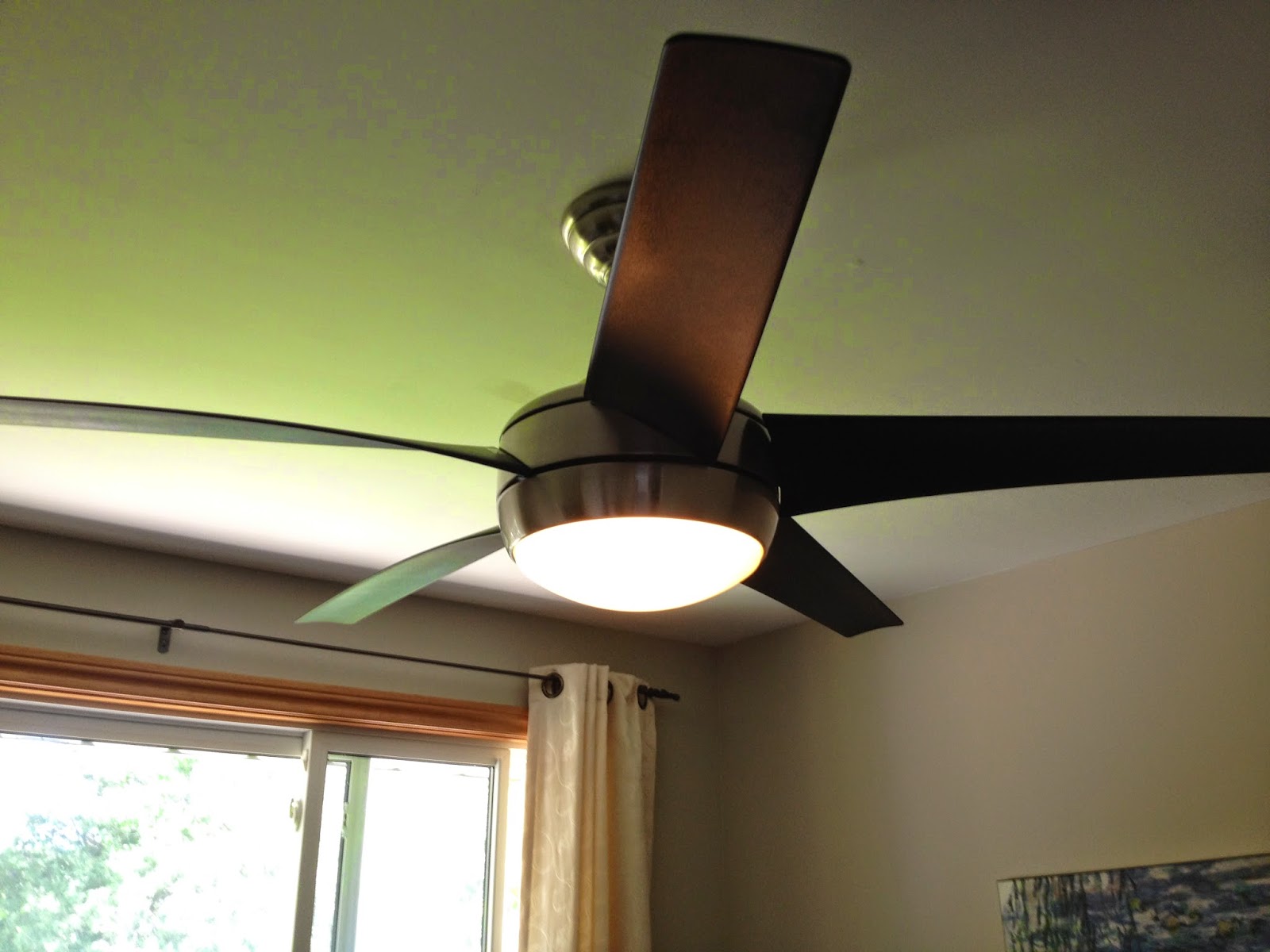 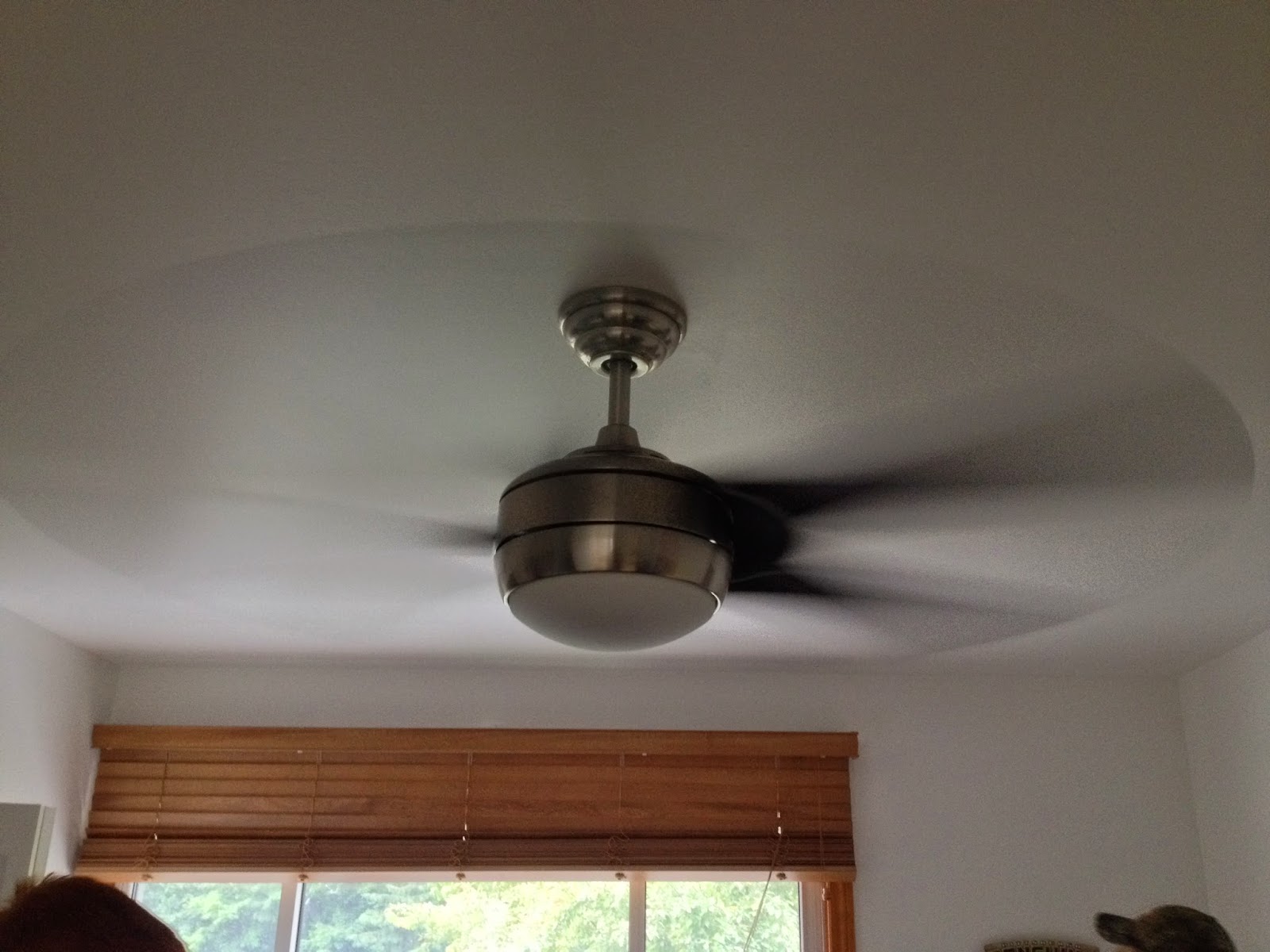 Tonight was Adam's last cadet Annual Review (he ages out of cadets before next June) at the arena in Dundas. It was certainly warmer than the last time we were there with Parker. We sure could have used one of those ceiling fans!

Adam received an Officer's award and helped to receive a gift from the Creer family (the broken propeller off our friend Susan's father's airplane). Near the end of the event, Adam presented to the squadron a metal cut-out of their logo (which he made at school).


Did I push the fan theme too far?  It did kind of define the weekend...

First day on the job!

Parker umpired his first game today!  He was a line umpire for a major T-ball game.

Wendy and I sat on our lawn chairs just like we have done since he was 5 years old. The memories of those years came flooding back as we slapped at the mosquitos, brushed off the caterpillars,  and braced against the cold wind. The only thing missing was a rain storm!

It was a little surprising to us how many people we actually knew at the park. I guess many in our baseball/hockey community have even younger kids than we do. Sitting there,  it felt vaguely like we were a set of grandparents lounging on our chairs watching someone else's kids play ball. Maybe we'll get really good at the grandparent thing before we have to do it for real!

Not sure, but it looked to us like Parker had just a little bit of fun - you can decide for yourselves.

It was almost, dare I say, peaceful here this weekend! So much so, that Wendy and I actually watched 2 whole movies!

Adam attended the annual D-Day parade in Dundas today. He wanted me to take a picture in his full uniform to replace one that we took before his last promotion.


Wendy and I even went for a hike together, as she slowly is recovering from her surgery. We took a shorter loop near the Dundas Trail Centre (Sawmill Trail). It only had a few hills and was just enough of a hike for Wendy. The weather was perfect as well.