And the answer is...

Wondering what we are doing with that booster seat from the previous post?

Our neighbours JP & Heather came to us over a month ago and asked if we were interested in having a visiting professor from China and her daughter stay with us for a year. We had been thinking about opening our home again for a while (Stanley stayed for 1.5 yr), so we quickly said yes - knowing we would have an empty nest after both boys left for college/university in September.

Less that 10 days after the kids left, off we were to the airport to pick up Ying and her 5 year old daughter Fanfan! In the last 5 days we have come to know two very wonderful people who had never been out of China and were ready for a new adventure. It has been so much fun learning about them and teaching them the odd ways Canadians do things. Lots of shopping for clothes and other essentials (we bought mitts even though it was 31C!), and lots of downtime as they adjust to their new home. We are even putting Google Translate through its paces, since Fanfan knew no English! One thing is for sure, Fanfan loves pink!


Not sure what the future will bring (kindergarten starts next week), but it sure is going to be fun!

I guess it is also good practice for our grandparenting skills!

Well, time certainly flies! We have officially become empty nesters. Both Adam and Parker have left home to go to school. We had planned on them taking turns going to school (they are nearly 5 years apart in age), but that is not how things have worked out. Cha-ching, cha-ching,...

Adam left first, just before Labour Day. He headed up to Canadore College in North Bay, about 4 hrs drive from home. He is in the Aviation Technology – Aircraft Maintenance and Avionics program. This is a 3-year intensive hands on training that seems to be right up Adam's alley. He is living in a basement apartment, sharing with his Dundas friend Neil, who is also going to Canadore for a different program. We don't have any current pictures of Adam of his move out date (we were at work), but if you check back to July 1, there are some pictures of him packing his first of several loads to head up to North Bay.

Parker left home last week. He is only about an hour away at Waterloo University in Kitchener-Waterloo. He is in the Bachelor of Arts & Business (Honours) Co-op program. He is planning to do a double major in Legal Studies and History. He is staying is residence at St. Jerome's University College (one of several colleges that are part of Waterloo U). It looks like a fantastic place to live and learn, as the Arts & Business program has a strong connection with St. Jerome's, having a number of his classes very close to his residence. He has a roommate and is on the 5th floor of a relatively new residence.


Adam is getting adjusted to his crazy schedule and the way things are run at the college. He really only had a few days during the Labour Day long weekend to get their apartment rearranged before classes began. We suspect that he may come up for air later in October, potentially coming back to our home for a few days.

Parker recently finished many days of orientation and was often too busy with friends to call us. Apparently there are a lot of females in Arts... and lots of card playing.  He is still figuring out textbooks and where everything is on campus. We dropped by just today to bring some things he needed, although he seems to forget that he has his own car there with him!  Maybe he will explore the area around the university with some friends.

Both boys seem to be adjusting well to not living under our roof. Time will tell whether they will see the opportunities and losses associated with living on their own. We are hoping that they have great adventures in their new environments.

And now, a teaser for a post that may come your way later this week... 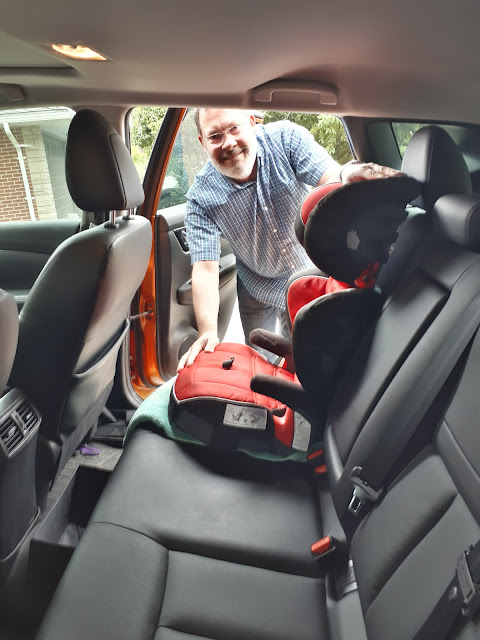 Yes. That is a car booster seat.