Wendy and I started with our group on the official 2015 Bruce Trail adventure! Turned out to be a great day (too warm for a jacket most of the day). Here is the whole crew for this adventure

The trails were in great condition compared to the mud bath 2 weeks ago. Part of the route included the Laura Secord Legacy Trail, adding a dose of history to the beginning of the adventure. 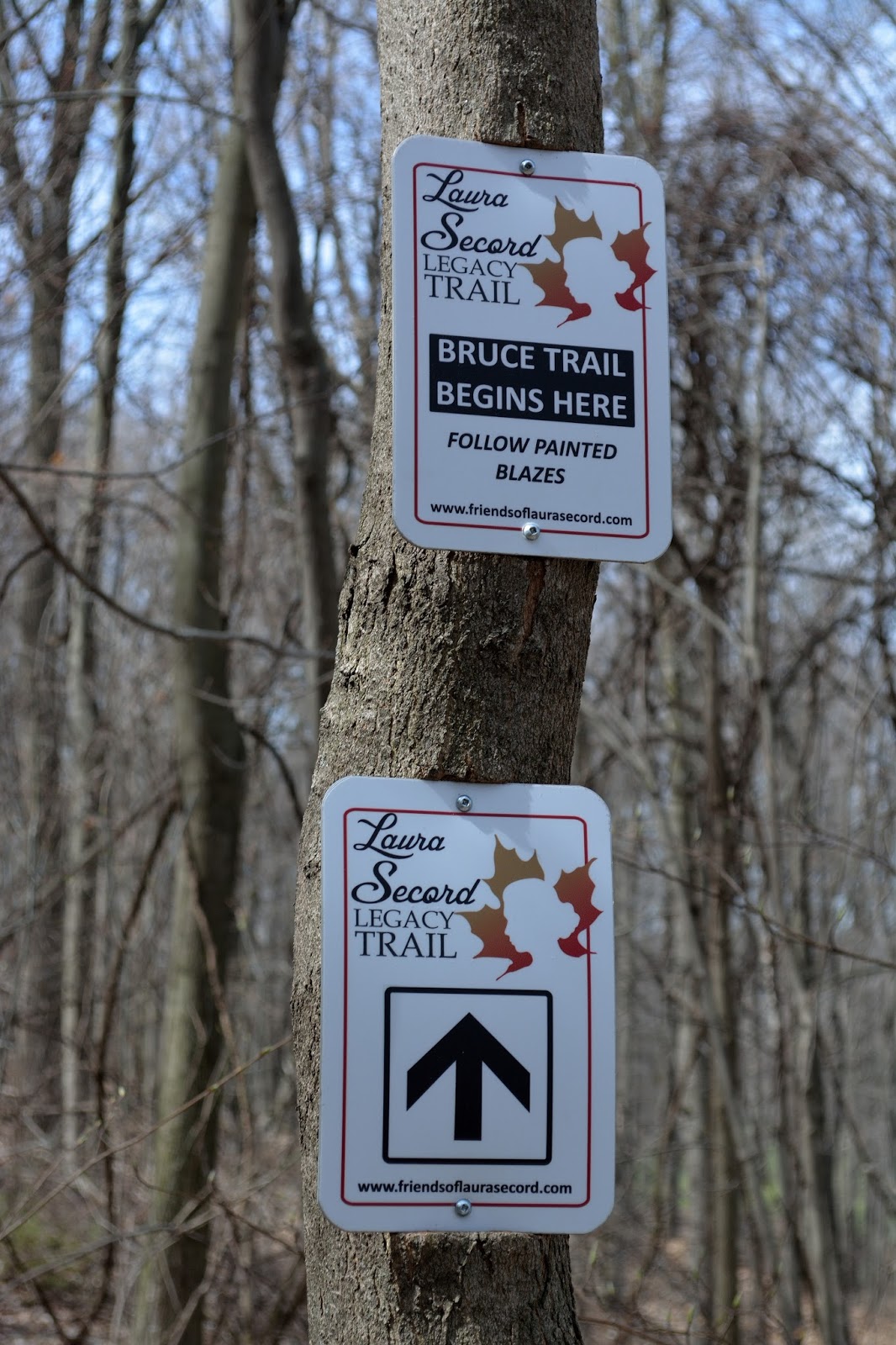 When we got home after the long and hot hike, it felt positively freezing in Dundas - only 6C. We had been less than an hour away and the weather was completely different at home!

That same evening (after the hike) we had Adam's 19th birthday party. We had all the family in attendance, including his Uncle Peter from North Carolina. Adam had asked the day before the party if we could buy some vegetarian hot dogs... a strange request coming from him, until he explained that he would be bringing his girlfriend to the party to meet us! Wow! She has got to have some gumption to meet us all at once like this! Sorry, no pictures. Wendy has smacked me for this already...

Adam received a number of different gifts, many of which were liquid. His cousin suggested that she might get a bottle for him, although the alternative was dessert with strippers. You had to be there to see his face change colour.
Now that Adam is "old", this is what he should expect to have happen to him every time he has a birthday cake. He may need to ensure that there is a fire extinguisher nearby from here on out!


During the party, 2 year old Laura really warmed up to Maddy and had lots of fun. Laura also was very impressed by Mel and Murray's dog Abby - she threw the ball for her for a long time in the back yard.  Here are a few extra shots from the party.


On Adam's real birthday, he attended his last cadet function and officially retired that evening. He is now working on the paperwork to return as a civilian (adult) volunteer.
Parker has some news as well. In addition to his twice weekly volunteering at the local seniors residence (Wentworth Lodge), he is in training at the Hamilton Golf and Country Club as part of their caddie program (their spelling, not mine... I prefer "caddy"). He will be trying out his hand as a caddie this summer to make some money, in addition to working as a baseball/T-ball umpire. He will certainly be busy.

Another change that happened this week is that Parker got his braces! Here he is with braces on his upper teeth. 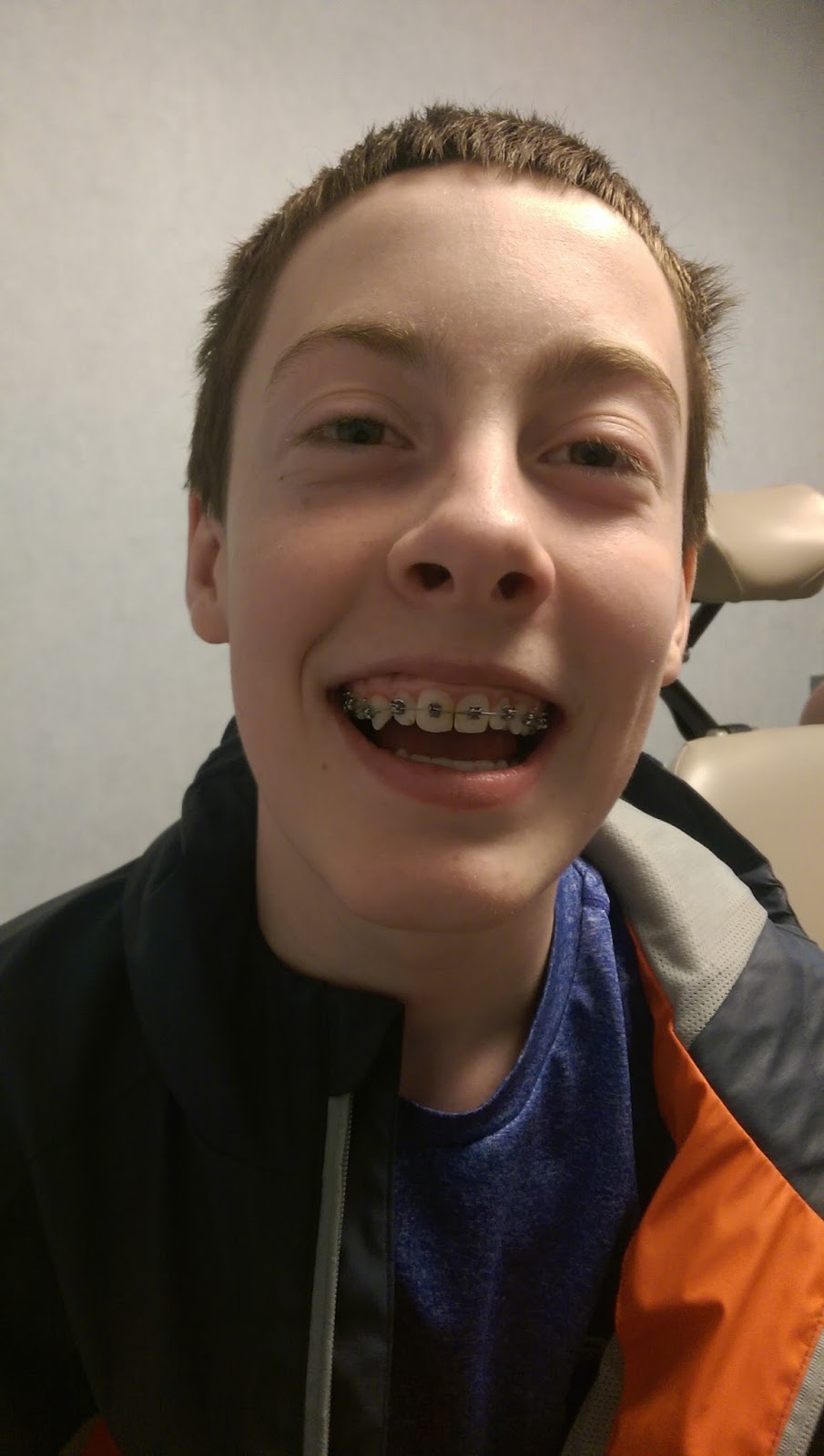 Well, that is about all of the major things that happened in the past week. I'll post again as new developments arise!

On Sunday we saw our first flower of spring - hidden in a deep corner of our garden.  I wouldn't have found it at all if I weren't looking for Maddy's ball. Wasn't much of a flower, but at least it was something! 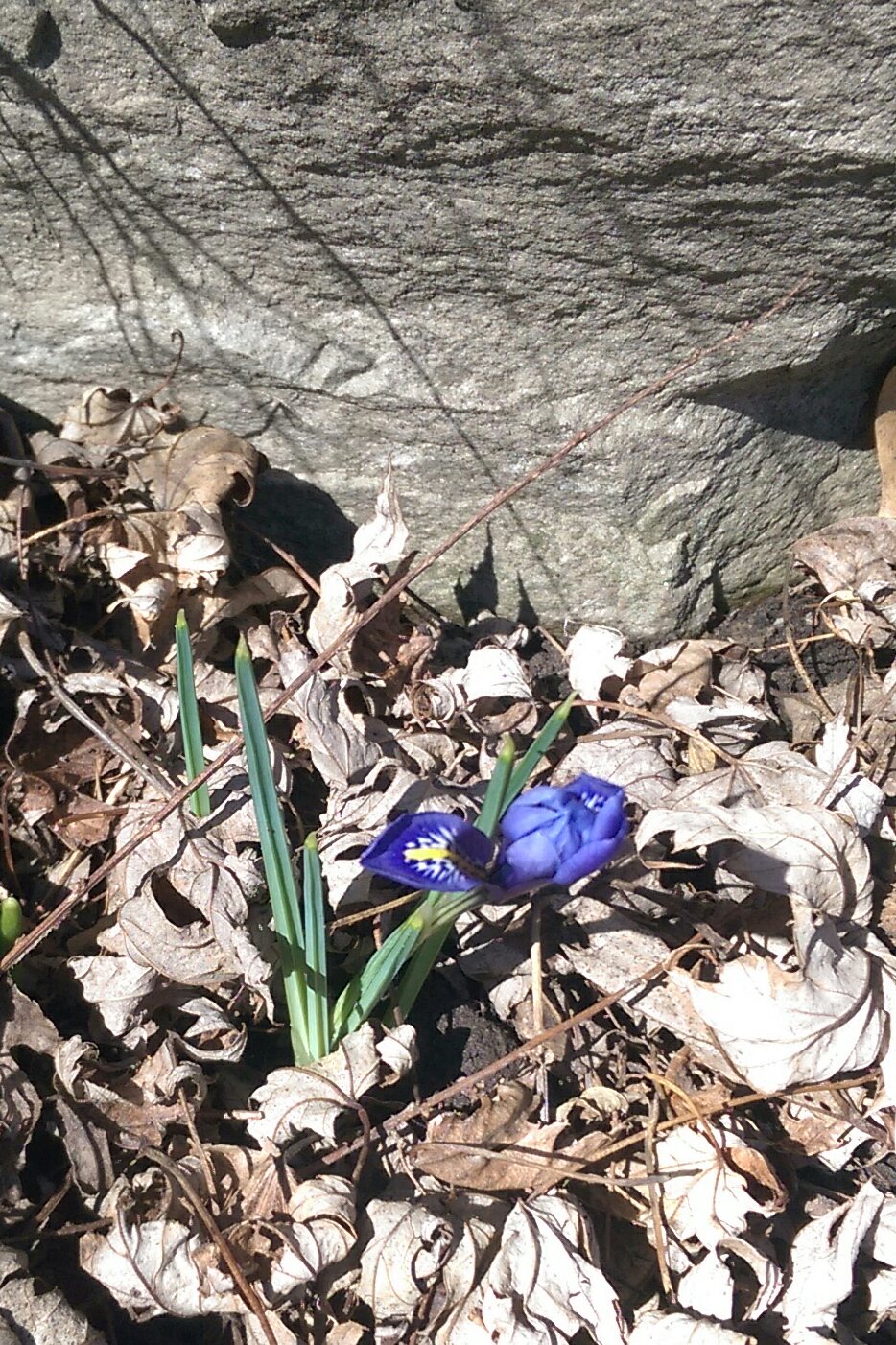 With a few days of nice warm weather, the flowers seemed to start coming up everywhere. We found these at our front step a couple of days later. Maddy even climbed the rocks to check them out. She rarely checks out flowers. The deer have not eaten them, yet, but I only give it a few more days before they do. 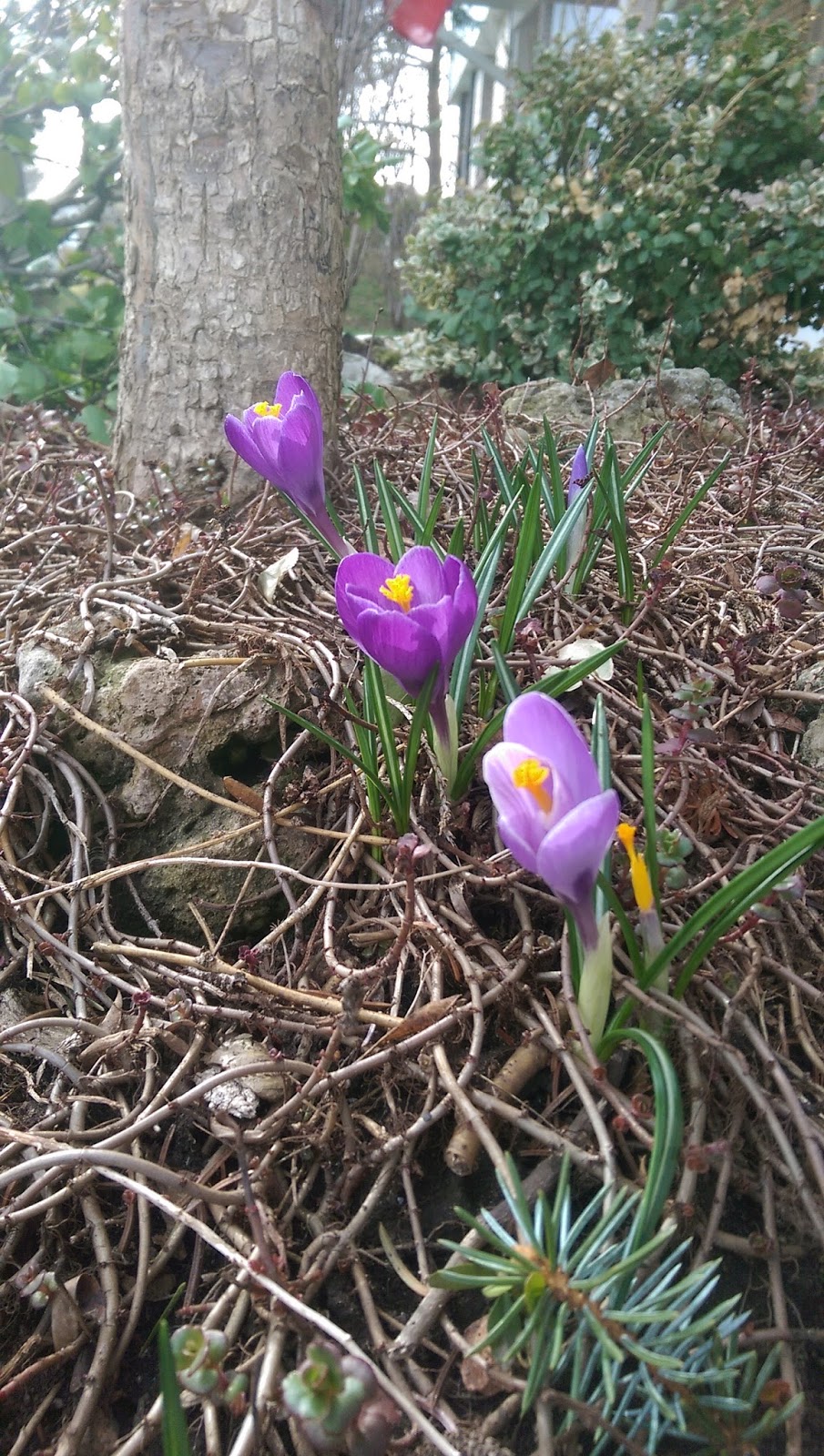 As the week drew to a close, several clusters of these came up in the back garden. I recall on Sunday that the green parts were barely out of the ground. Over 20C temperatures will do that... 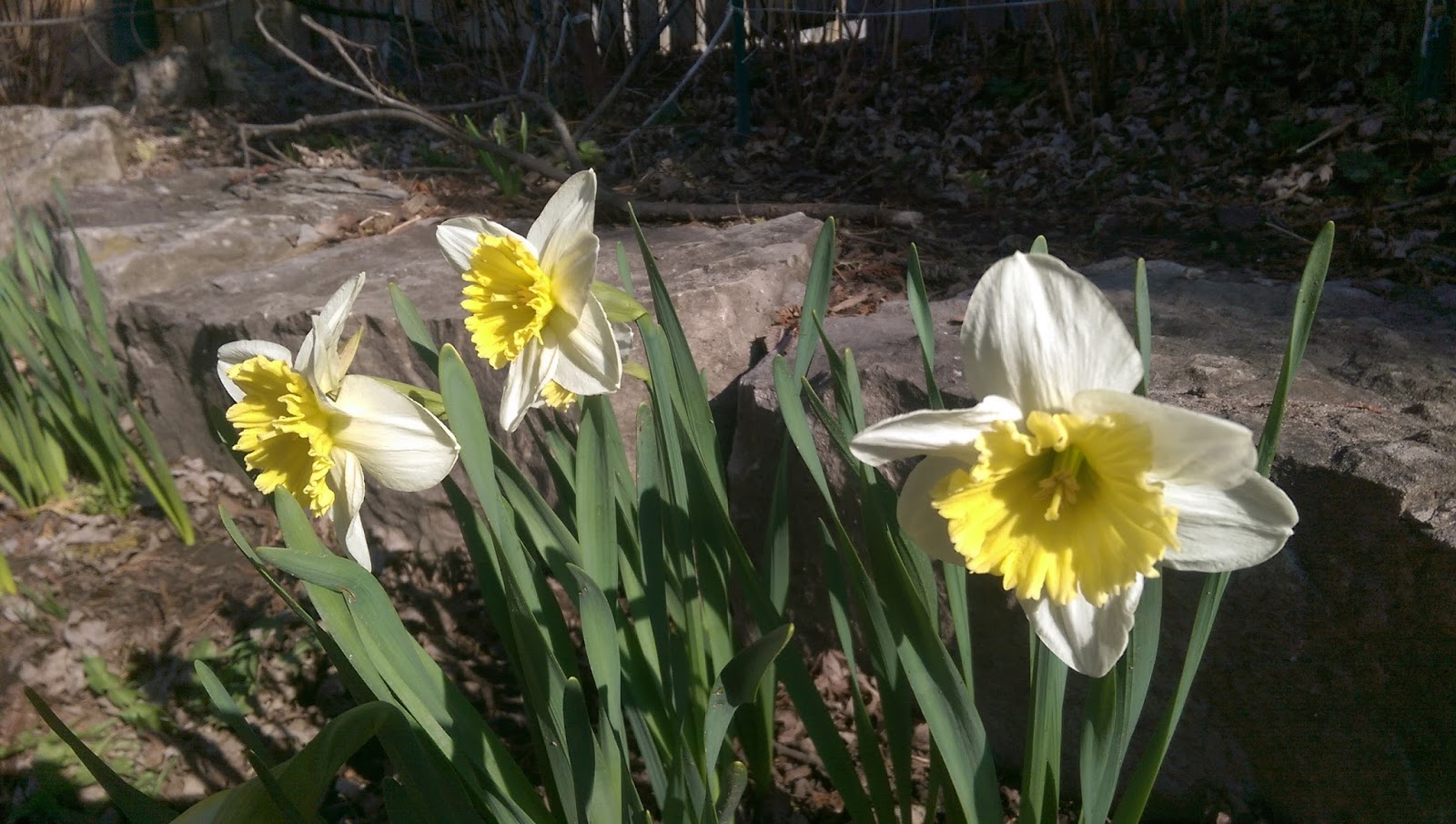 Today the next player jumped up, right next to our front step/walkway (I think 3 flowers in total). They were not even visible at all when the first few flowers appeared earlier in the week. The gardener that we hired planted a number of bulbs last year, so we are expecting to be surprised again any time. 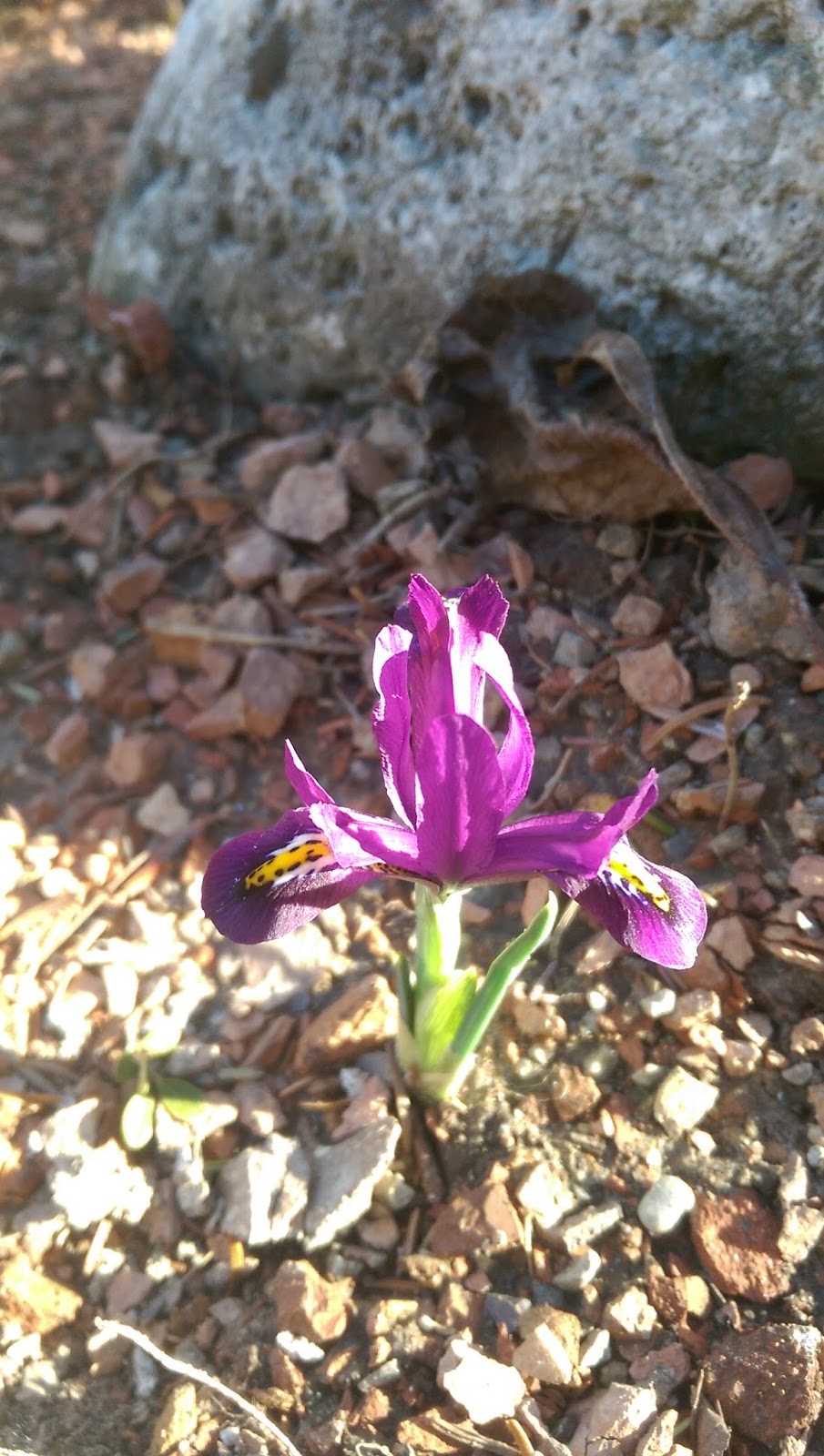 Today, Adam took out the lawnmower and got it ready (maybe needing it next week). The snow blower also headed into storage for the summer. An even greater sign that the winter is over... we had the snow tires taken off both cars and switched to summer tires!

Yes, that was our week in summary. This is going to be a longer than normal post, so be prepared. In keeping with the B theme, I'll go over it... BACKWARDS.


Happy Easter, everyone! Seems like our Easter Bunny hunter wasn't too thrilled to have snow again. She was out looking for evidence left over from the Easter bunny, which she usually eats (eeeewwww...!).
There wasn't much, but we had finally rid ourselves of the white stuff just yesterday! Maybe spring will come back this week.

Yesterday, Wendy, Maddy, and I took a trip down to the Niagara area to hike. We parked at Brock's monument. This monument honours Major General Sir Isaac Brock - who died at this site during the war of 1812.
Although slightly cool with the wind, it turned out to be a nice day. We were actually at this site because it is the southern terminus of the Bruce Trail (i.e. km "0"). Wendy and I will be tackling the Bruce Trail this spring and summer with several friends from Dundas. We aren't actually trying to do an "end-to-end" of the Bruce Trail (over 800 km), although it might be possible to do so over several years. The main idea is to get out and do some hiking with a specific goal in mind - we hope to approach the Dundas area by the end of the summer. 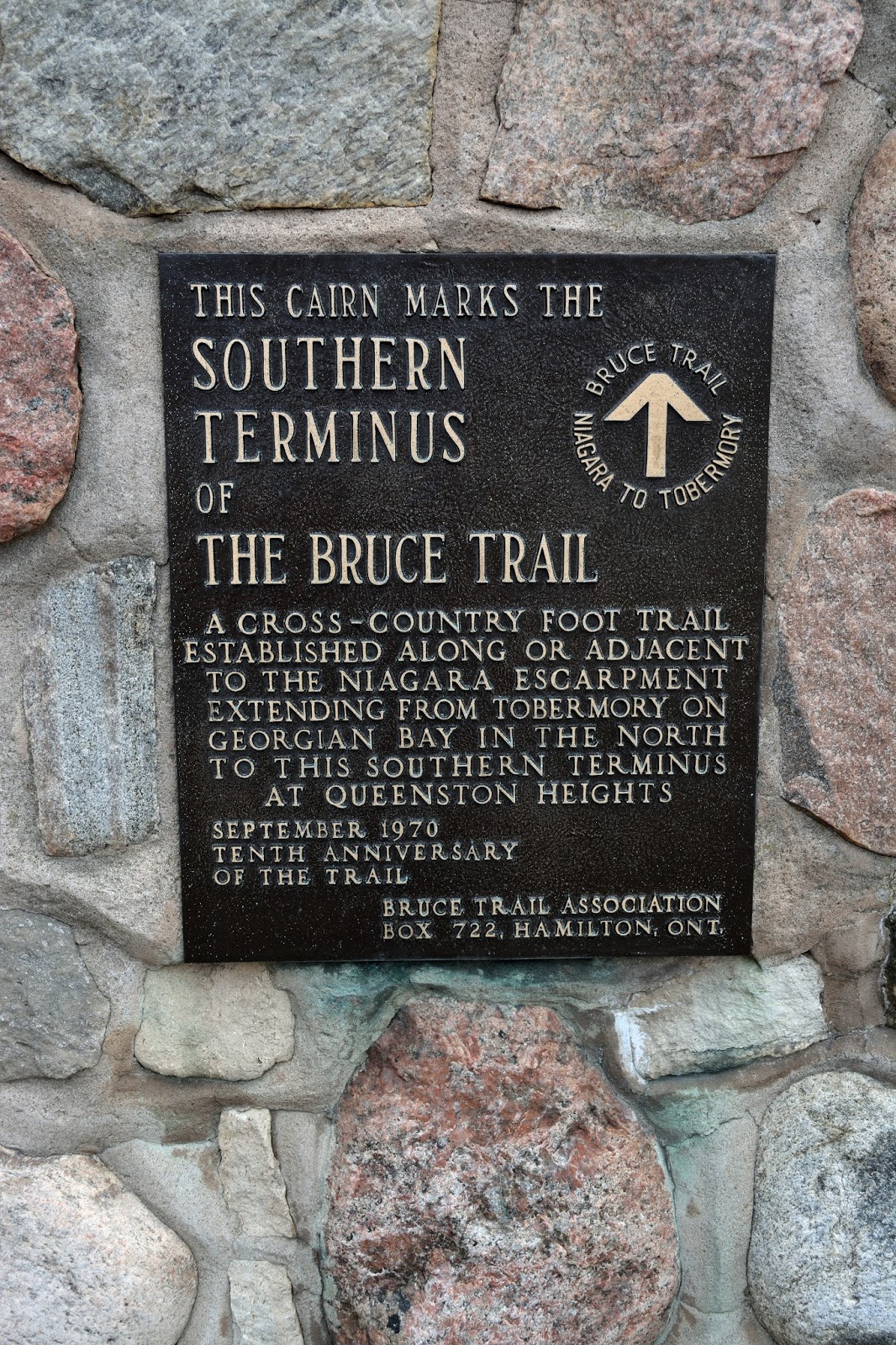 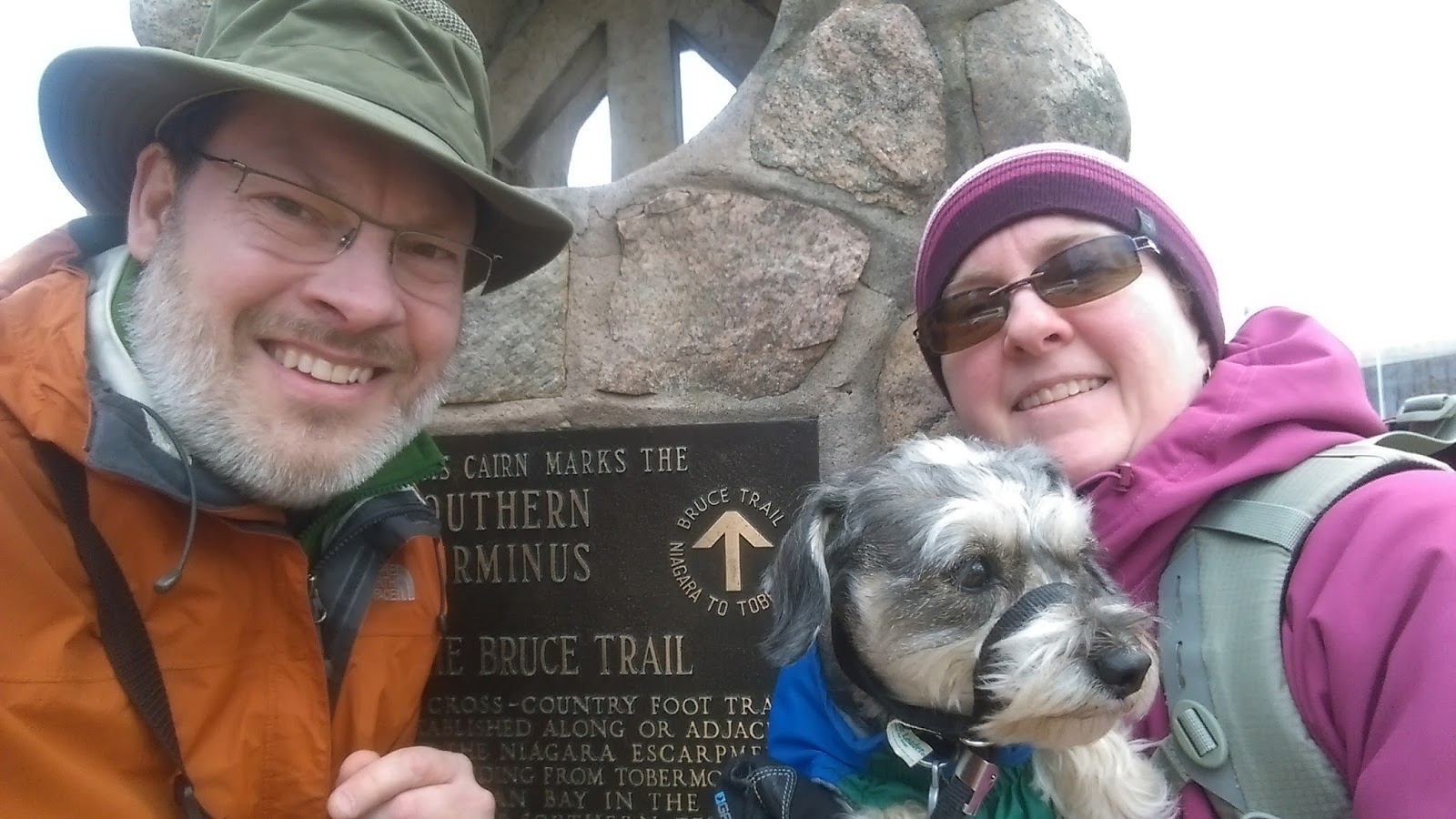 We came down on our own this weekend mostly to check out the parking locations for the beginning and end of our first 'official' hike on the trails. We also wanted to get a sense of what kind of terrain might be involved. This can help in planning the hikes in the next few months. We only hiked the first 3 or 4 km then returned to the starting point. We will come down to start the first 7.5 km of the trail in a few weeks. This sign describes what the Blazes mean on the trail.
We were excited to come across the first waterfall of the Bruce Trail somewhere around the 2.5 km mark.

Don't get too excited - to give you a sense of scale... here is the waterfall with Maddy and Wendy.

In the first few km we also came across this strange metal contraption that didn't have any obvious purpose or function. Not sure exactly what it was, but there was a post underneath it. Unfortunately for us, any plaque that may have been on the post was long gone. Anyone have any ideas what this is? One idea I had was that it was an old piece of equipment from the apparently abandoned quarry nearby.

The trail itself was quite level and without any major obstacles or big hills. However, it was almost uniformly muddy. A good portion of the trail looked like this. Maddy had fun.

When we met with our friends (Terry, Theresa, Dave, and Nicole) to talk about the idea of hiking the Bruce Trail, we did cover the topic of footwear needed for the trails. FYI Dave, if you are planning on wearing sandals, it looks like someone else tried the same thing...

Also this weekend, we had family over for a combined Birthday party for myself and for Wendy's father. I didn't take any pictures, but a few others did and they will likely email them to me soon.

Of course, when family comes over, the highlight for Wendy is always going to be the Baby! Our niece and baby attended the party, along with her husband and my sister from B.C. (oops, I think I missed an opportunity to continue the B alliteration on that one...). In addition, Wendy's parents and our friends Mel and Murray were on hand.

During the middle of the week, Parker won a spot on the Junior Men's Badminton team. He has being trying out for weeks, and got a spot on the team for Men's singles (they also had doubles teams). He is happy about being on the team, and we are more happy that he is involved in something at school. Sorry, no pictures yet.

Stanley turned 18 last weekend, so we had a little Birthday celebration after dinner with some cupcakes.
A week ago today, we drove to Cambridge and Kitchener area to visit the family and to go Bowling! Our niece had won a prize that included bowling for 6 and a $25 gift card for Boston Pizza (darn, another B I should have used!). The Boston Pizza is actually inside the Bingemans entertainment complex (Bingemans) in Kitchener.

After a big pizza feast for dinner, Parker, Stanley, and Jacob went over to play Billiards. Jacob does't know what Balls are for yet, so he wasn't thrilled. 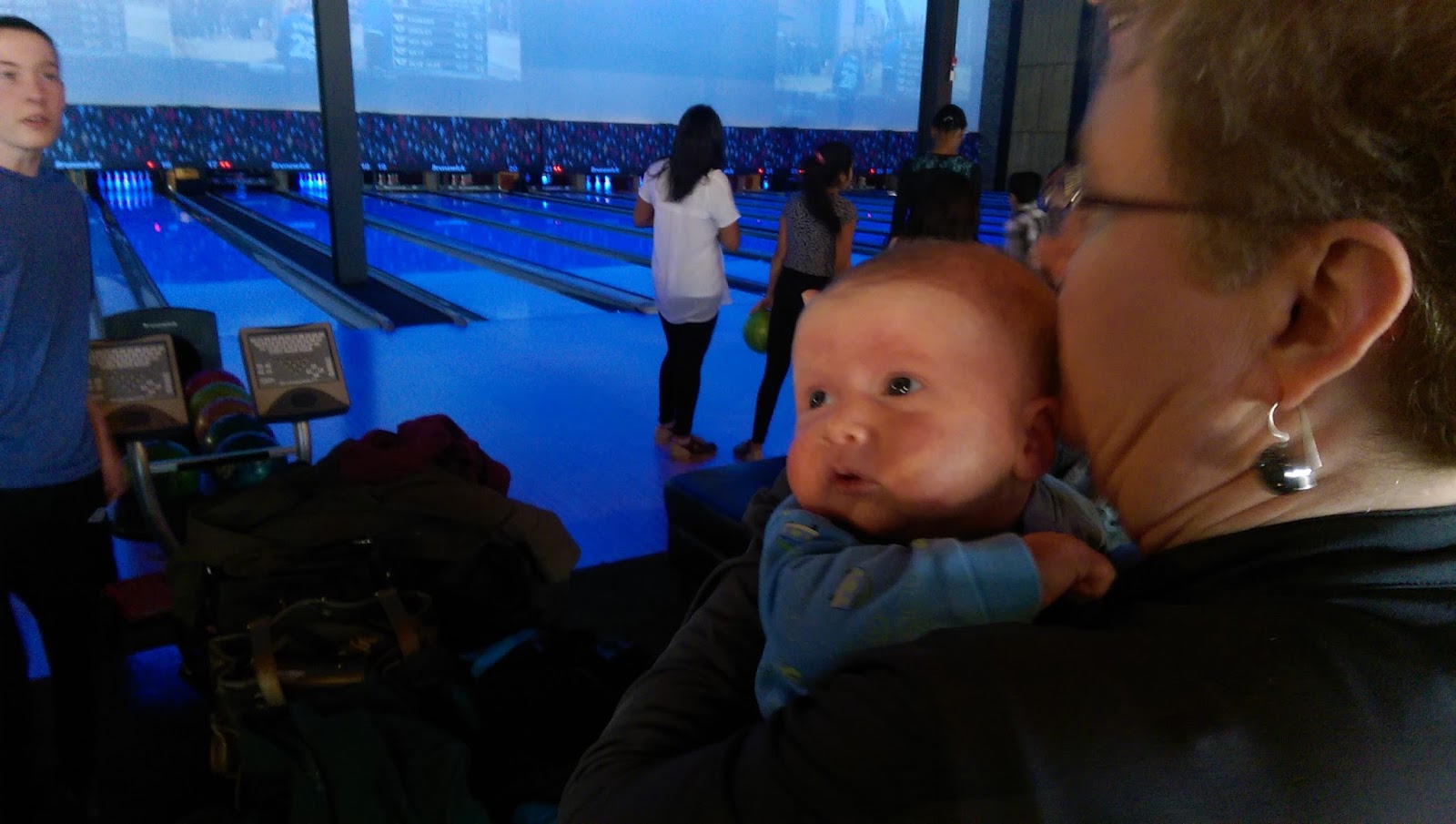 At least I was able to prove to everyone that I could lift a 10 pin bowling ball. Unfortunately, the putting it down part wasn't always as successful...or smooth. I definitely felt it the next day.
My sister (from B.C.) is visiting to help with her new grandson. She probably bowled longer than I did!
Jacob wasn't thrilled at all with the bowling ball. Wendy decided to sacrifice going to bowling so she could hold the Baby. 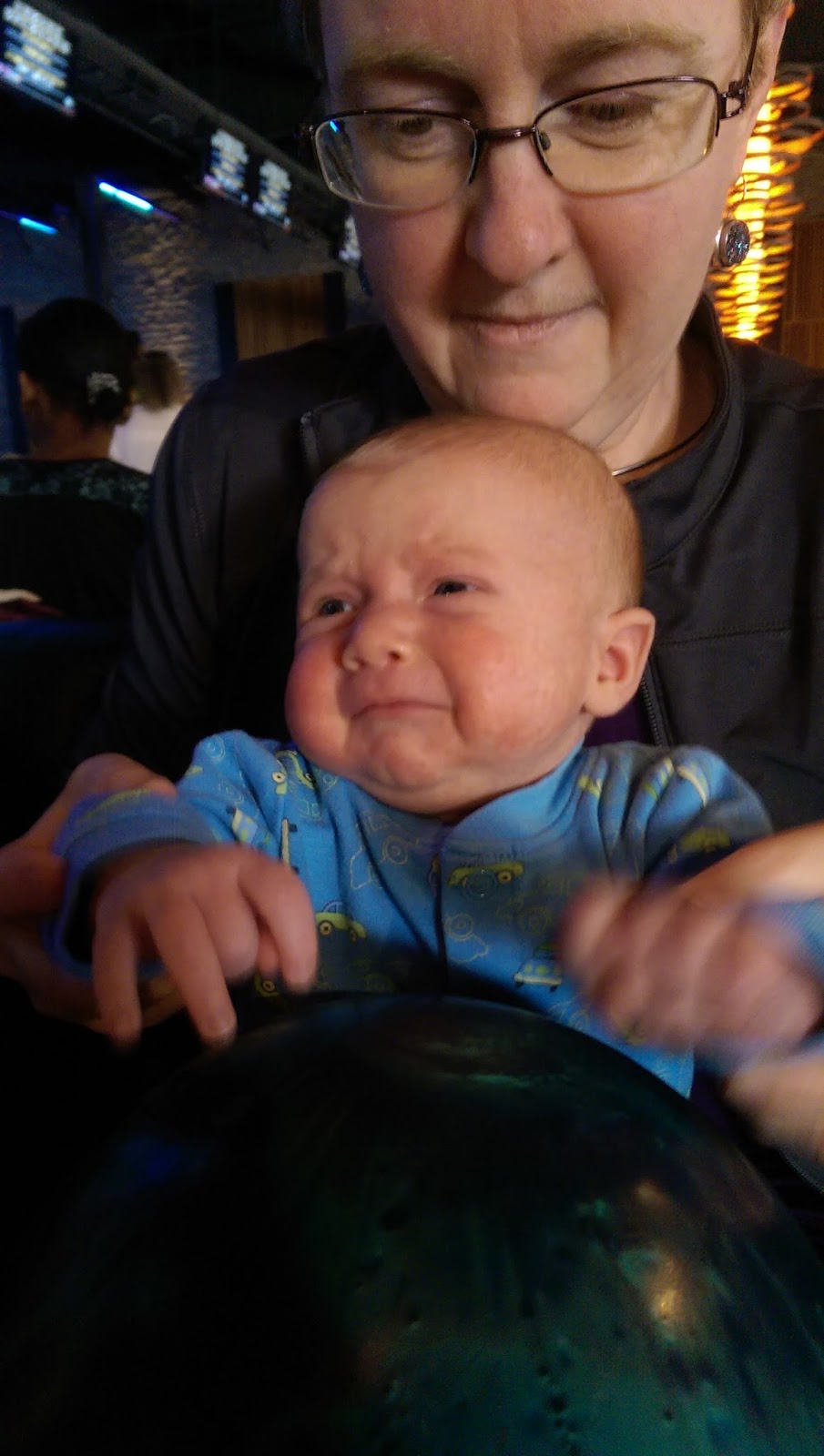 I took this picture because I saw Stanley taking the same scene with his phone. This image contains the final B of the post - Brunswick.

Until next time - and don't worry, I won't do the B thing again!